In August 2001 I went for a Club meal to St. Julia. Sitting next to me was a little old lady I had never met before, Jean Read of Juberri. During the meal she asked me what I did. I replied; “ I am a ‘boring old fart’ who is interested in the Great War”, Then came “ Have you ever heard of of a place called Salonika?  My  mother’s second husband was killed there in 1916, and I have met very few who knew

where it was”.  Feeling like some sort of con-artist I informed her that Salonika  was one of my special subjects on the Great War, I was one of the founder members of the Salonika Campaign Society, its first chairman, and we had a membership of 150. Also, in September 2002 I would be going to Northern Greece, visiting all eight war cemeteries there, and if she gave me some details I would visit the grave for her.

Jean had thought that most of the information had been lost or thrown out in her move to Juberri to live with her daughter, however, she managed to find some photos, and also the original letter written by the battalion chaplain to her mother about her husband’s death. It was not until a year later, when in the cemetery, that I discovered that the chaplain was also buried in the cemetery, killed just ten days later. So what/where is Salonika?

Salonika is in Northern Greece, now called, Thessaloniki, the second largest city in Greece. An Anglo-French Force landed at Salonika on 5th October 1915, and marched north to aid Serbia who had recently been attacked by combined German, Austro-Hungarian and Bulgarian armies. This attempt failed, and the ‘Salinika Army’, consolidated a front line around the city. Evacuation was contemplated, (as in Gallipoli), but Salonika, was now strategically important; if the enemy captured Salonika, they would have another U-Boat base in the Mediterranean. The allies were forced into protecting Salonika. Manpower was needed at the Western Front, but all the allies sent forces to Salonika; the British, more divisions including Indians, the French added their colonial divisions, The Italians, Serbians and Russians sent troops, even Japanese sent destroyers to the Med to help, and these were used to help protect troop and hospital ships to and from Salonika. The Salonika Campaign was the only front where more casualties were caused through illness, ( malaria, backwater fever, etc), than combat – but this does not mean the men (and women) did not do their share at Salonika.

Three British Victory Crosses were awarded at Salonika. Also, the women did their bit. The medical units at Salonika saw the participation of Canadiens, South Africans, New Zealanders and Australians. There was one nurse, however, who was a bit different. An Englishwoman Flora Sandes, gave up nursing the troops, and joined up the Serbian Army, in the ‘Iron Division’ . She was wounded in action, awarded the Serbian King George Star for bravery, and ended the war as a Sergeant Major. In the 1950s a book was written about her called “The Lovely Sergeant”.

The cemeteries of the Salonika Campaign contain the graves of thousands who died in this forgotten Front of the Great War, and this article is about two of them.

Most of the British fighting of the Salonika Campaign took part in two sections of the Front; the northern mountainous area around Dorian Lake, and to the east, the Struma Valley. In the summer of 1916 the British 27th Division was opposite the Bulgarian held town of Seres. They were ordered to capture Seres, but the village of Yenikoi had to be taken first. The 2nd Duke of Cornwall’s Light Infantry were in reserve, left in the trenches. Captain Edger Kynnersley Jenkins was going up his line of men to steady them when a bullet hit him. His friend and fellow officer Rev. Mace went in the ambulance with Capt. Jenkins, to the 40th Casualty Clearing Station, a few kilometres behind the line, but Captain Jenkins died just before arriving. He was buried the next day, and on the 25th September, Rev. Mace wrote a letter to Jenkins’s wife. On the 3rd of October Yenikio was attacked again, this time Captain Mace was killed in action. His father was also Chaplain. Yenikio was captured on the 4th October 1916.

On Sunday 22nd September, 2002 a party of 18 (SCS Members) visited Struma British Cemetery. This cemetery contains 947 graves. Due to the unstable soil, the cemetery has flat low-lying headstones. I placed a photograph of Capt. Jenkins on his headstone, with the poppy cross from Jean, and read out the letter from the chaplain to the assembled party. A poppy cross was also left at the grave of Captain Mace.

The most famous person buried at Struma Military Cemetery is a German Lieutenant, Rudolph von Eschwege, who was an air ace of the Salonika Campaign. He was based at Drama, and was known as “the eagle of the Aegean”. Eschwege had the habit of attacking the British observation balloons. On 28th October 1917 a booby-trap was set up; 500 pounds of amatol was put in the balloon, and when Eschwege started to attack, it was detonated and Eschwege crashed near where the Salonika to Seres road crosses the Struma river. He was buried the next day with full military honours.

Like the forgotten 14th Army in Burma in the Second World War, however, due to a chance lunchtime meeting in Andorra, two Captains, both killed in action, and buried in northern Greece, have been remembered.

The Multi-national Force of Salonika attacked in September 1918, resulting in the first enemy surrender of World War One, that of Bulgaria, on 30th September 1918. 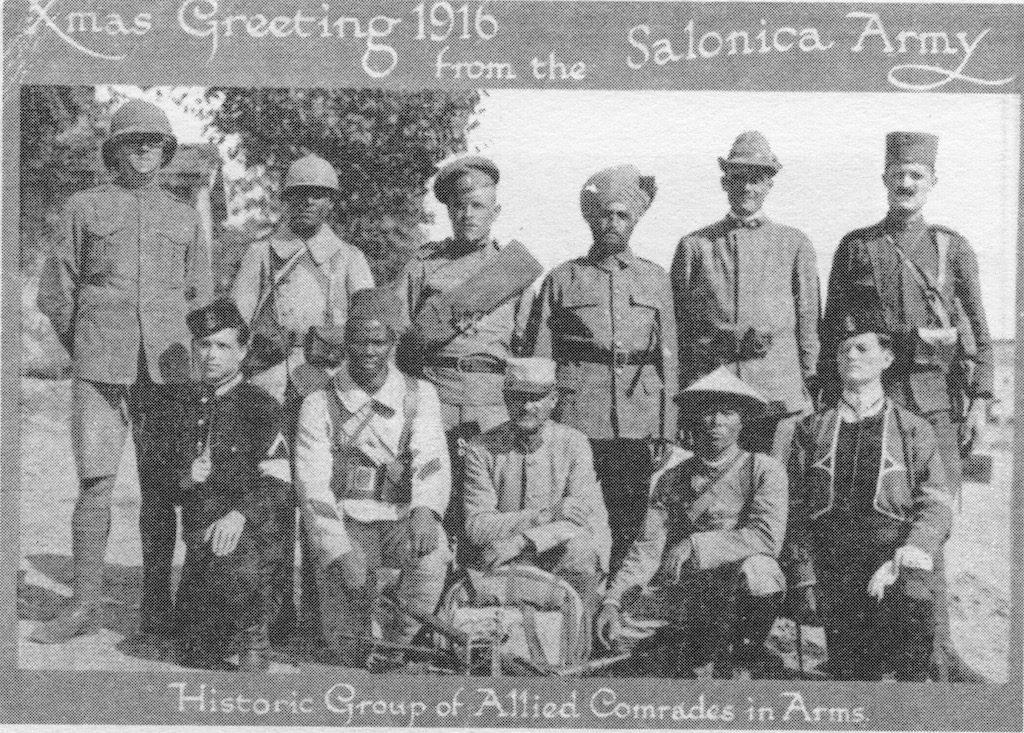 Jean Read’s mother (Vivien), widowed in 1916 was married again, to another soldier, who was wounded on the Western Front while fighting with the ‘ Artist Rifles’. Jean was born in 1921.

Published in the Inter-Comm Spring 2003