↓ Skip to Main Content
Home > INTER-COMM > Historical Andorra – Articles > Motoring in and around Andorra in Days gone by – Dec.1993

Motoring in and around Andorra in Days gone by – Dec.1993

Published in the Inter-Comm of Winter 1993

1950 A journey through Andorra

Driving in 1950 in Pyrenees towards Andorra

Joseph Lowrey, having visited Luxembourg and Liechtenstein, set out in a Jowett Javelin to Andorra “another of the little countries which have escaped absorption by their larger neighbours and have a charm of their own.” He continued, “ Andorra’s road is of a roughness which is tolerable in a country where distances are short. Scenically superb, ablaze with spring wild flowers, but incapable of being photographed without an electricity pylon popping into the picture. Petrol rationing seems forgivable when a visitor gets his daily 2-gallon coupon by visiting what is surely the world’s tiniest baker’s shop – a touch no musical comedy author would dare invent ! With only two roads in the whole country two gallons seems quite a lot, but, having been roused from his siesta to serve us with our ration, the petrol pump owner would not dream of letting us head onwards into Spain with only a half-full tank”. 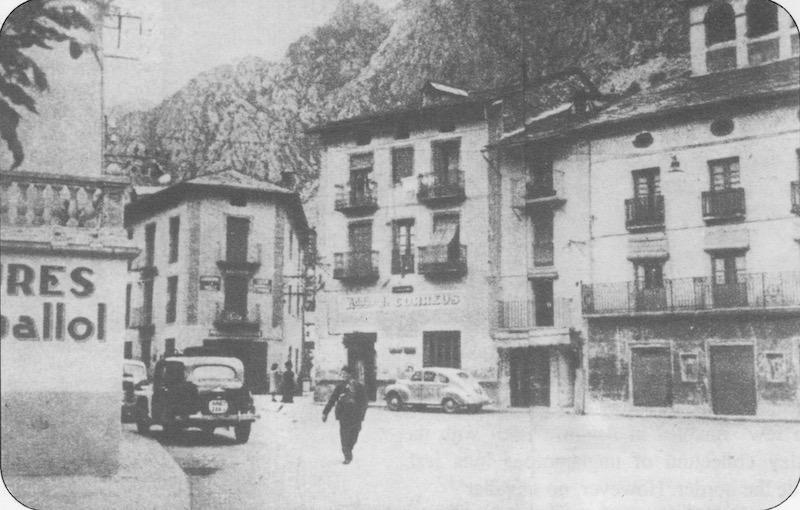 “Correos” being markedly cheaper than “La Postes et Telegraphes” for cards to England. The little Republic has a strange boom-town atmosphere with modern automobiles alongside the most primitive hand-ploughs, and with nylons and Paris perfumes in shanty-town shops. We stayed at Soldeu where the near vegetarian eating of one member of our party brought tears to the eyes of a hotelier taking pride in the huge “Vin Compris” at his Hotel Bonell”.

1952 Another visit to Andorra

Michael Collier wrote this description of a journey in a 1951 Austin A.40. “The frontier appears a mere formality and we were across in a few minutes in Andorra itself with its motley collection of unglamorous huts just inside the border. However, no traveller should be put off, the rest of Andorra is the perfect example of a little Ruritanian republic. The tarmac disappeared and white dust rose up around us as we rapidly completed the assent of the La Casa with its succession of spiral bends. ( my only companion was a vintage Bugatti saloon which seemed roadworthy enough but the rattles from the coachwork were enough to wake the dead). About three miles from the town of Andorra itself the road became miraculously better, up to that point it had been frankly rough with lots of rock outcrop on the pass itself and the road down the valley. Various nationalities were present in the town with the inevitable sprinkling of sleek American vehicles and intrepid baby Renaults, the latter often with four up and luggage on the roof” 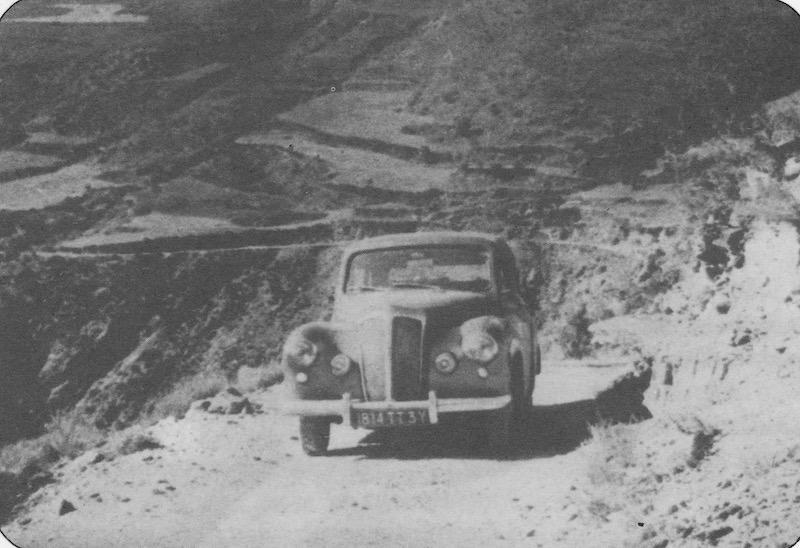 Not Andorra, but an interesting contrast with the recent road building on the road across to Sort. A Mr.Kay, who was working in Paris, drove his Daimler Conquest down through France and over the “Port de La Bonaigua” . At Sort there was a signpost saying Seo D’ Urgel” and a 100 yes further on “Temporary Bridge – Weight capacity not guaranteed” Mr. Kay continued, “The road was completely

unsurfaced, very narrow, extremely steep in parts and simply cut into the edge of the mountain with no protection at all. However, it seems the only way across the mountains in a 60 mile stretch of country and the landscape is magnificent. In the pine forests the road became no more than a bad track until it suddenly emerged into a fairy-like upland pasture with horses grazing and a forest-keepers cottage. We pushed on, once bellying the car with an awful rending sound. At last the main road came in sight still far below, there was no way of telling if we had come by the proper road – it had been very spectacular and, in parts, rather frightening. The distance was 32 miles and it had taken us three hours!”.  Mr. Kay returned through Andorra – “finding the road more continuously uncomfortable than anything encountered in Spain”

Thanks to Christopher Balfour for supplying the above memories.